These instructions are written primarily for users trying to log in to a CAC login node, taking linuxlogin as an example; however, the same methods should work for nearly any remote Linux machine. Note: If you are trying to connect to a Red Cloud Linux instance, please see the specific connection instructions in the documentation first. There are also troubleshooting steps to help you if you get stuck.

There are three distinct ways to connect to a remote Linux machine:

These instructions are intended mainly for users of personal computers and workstations. However, much of the material carries over to mobile computing platforms such as tablets and smartphones. You will have to locate and download an app to enable SSH or VNC connectivity; even a browser plug-in may suffice.

Whichever method you choose, at your first login, you will be challenged for a new password (this does not apply to Red Cloud resources). Find help at Change a Password at First Login.

For basic command-line access, a Secure Shell (SSH) client will give you a remote command shell on one of the login nodes.

To connect to the CAC general login node with ssh, you simply open a terminal window and type

macOS is built on a version of Unix, so ssh is available directly from the Terminal application.

Secure Shell (ssh) clients work nicely as long as they support the SSH2 protocol. As mentioned, telnet is disabled for security reasons. A popular client for Windows is the free PuTTY client.

When choosing an SSH client, one consideration is how well other SSH-related tools are integrated, such as SCP (secure copy) and SFTP (secure file transfer protocol). With PuTTY, you can use the separate PSFTP client or PSCP command to transfer files back and forth. But PuTTY is just one choice; other clients for Windows exist.

A completely different approach is to create a self-contained Linux environment within Windows and use the usual Linux commands.

X-Windows (also called X11) is the longstanding Unix mechanism for displaying interactive graphics in a window. Your "X server" software runs locally, but it is capable of displaying windows that have been generated either locally or remotely. An "X client" on a remote machine can create X-Windows for local display, but it is necessary first to establish a shell on that machine using SSH.

Among other things, X-Windows gives you the ability to display a GUI that originates on a login node. However, this ability does NOT imply that you are permitted to run compute-intensive, GUI-driven applications on these machines. On linuxlogin, such usage is contrary to CAC policy. On other shared resources, it is disrespectful toward other users because the login node may become unresponsive through your actions.

The standard way to use X-Windows is to tunnel the X-Windows protocol through an ssh connection. If you open your ssh session with the -X option, it will automatically set up the necessary tunnel and environment variables.

If all goes well, you should see a valid setting for your DISPLAY environment variable, then have a blank window presented to you by gs (Ghostscript, the PostScript and PDF previewer). If not, check the target system to make sure xorg-x11-xauth has been installed. Note, if gs is not installed on the machine you're logging into, you can try another X client such as xterm, xclock, xlogo, emacs, etc.

The -Y option is much like -X, but it uses a trusted version of X-windows forwarding.

When you're working on a cluster, the trusted (-Y) version is necessary for forwarding X11 connections in two steps: from a compute node to the login node, then back to your client machine.

In order to use X-Windows on a Mac, an X11 server needs to be installed on the system. The recommended X11 server for use on a Mac is provided by the XQuartz project. XQuartz used to be included with Mac OS X installations (versions 10.5 through 10.7), but is no longer included and must be downloaded and installed manually. After installing XQuartz, be sure to restart your Mac before using X11.

Once XQuartz is installed you should start ssh with the -X or -Y option, which will cause the X11 server to start automatically on your Mac. You can then try the "gs" test in the shell, as described above for Linux.

A few of the SSH clients mentioned above come with a bundled X server. Otherwise, along with your SSH client (e.g., PuTTY), you will generally need to install an X-Windows server on your Windows machine.

If you purchase the website release of Xming, remember to install the Xming-fonts, as well.

Here are some other X-server possibilities for Windows:

Here is how to start a X-Windows-capable session using PuTTY and either VcXsrv or Xming.

Whichever Windows client and X server you choose, you should test your X-Windows setup by typing the command for Ghostscript, which is a PostScript and PDF previewer:

A blank window should appear on your screen. You can stop it by typing Ctrl-c in the terminal window.

If this test fails, check to make sure xorg-x11-xauth has been installed on the target system. Also, if you are using a Linux-like shell in Windows (WSL or Cygwin/X), there are a couple of other things to check:

TigerVNC server has been installed on linuxlogin so you can try VNC there. If you would like to use VNC on a private cluster managed by CAC, please ask your PI to request the VNC installation. Note, a Linux desktop manager is a required part of a VNC installation; GNOME is often a good choice (as is xfce, for those who prefer a minimal desktop).

For security reasons, CAC requires all VNC connections to be tunneled inside ssh. You will therefore need to be able to connect to the remote computer using SSH. The firewalls running at CAC for all login nodes (e.g., linuxlogin) commonly block all incoming ports except for ssh, so VNC connections must be made over a ssh tunnel as described below.

VNC gives you the ability to establish a remote desktop on a login node, but this ability does NOT imply that you are permitted to run compute-intensive, GUI-driven applications on these machines. On linuxlogin, such usage is contrary to CAC policy. On other shared resources, it is disrespectful toward other users because the login node may become unresponsive through your actions.

Here is a good example of how to use VNC appropriately. By following these steps you can run (say) Abaqus in GUI-driven mode on a compute node that has been allocated to you through an interactive batch job.

Local setup for all platforms

The geometry numbers 1600x900 (or other numbers of your choosing) specify the size of the desktop in pixels.

Let's say the port number on linuxlogin is 5901 (as above), and your CAC userid is uid12. Here's what to do to start ssh port forwarding, or tunneling, to that port.

Or you can type the following full command into a local terminal, which opens another ssh session including the tunnel:

To disconnect your client

To reconnect your client

When you are all done

An alternative to password-based authentication is public key authentication (PKA). SSH has a well-established mechanism for making use of a public/private key pair.

Note: setting this up for yourself is completely optional! On CAC private clusters where an SSH key pair is required for intra-cluster communications, one will be created for you when first log in to the head node, and you never need to worry about it.

Clearly, if you want to make use of this mechanism, you will need to set up a public/private key pair!

Your ssh key pair will only need to be created once. You will not need to repeat this step. You can complete this step from linuxlogin.cac.cornell.edu, the general Linux login node, or from the login node of a private cluster. (If this is your first login to a CAC login node, it will ask you to change your password; this will become your password for connecting to CAC login nodes in the future.) The steps to create your key pair are as follows:

As a final step, you need to copy the private key, id_rsa, to the computer that you will be logging in from.

You'll want to put the private key in the ~/.ssh directory. You may wish to call this key id_rsa for convenience, BUT be careful not to overwrite an existing key with that name. Let's say you decide instead to call your new private key cac_id_rsa on your local computer, just to be safe. You MUST change permissions on this key to keep it private:

Now you're ready to use passwordless SSH to connect to linuxlogin. From a terminal in macOS or Linux, you do the following:

The way to proceed in Windows depends on the SSH client you are using. Here, we cover PuTTY as an example. The first step is to use PuTTYgen to convert the SSH private key for use with PuTTY and plink. 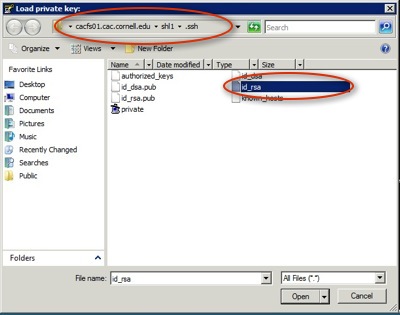 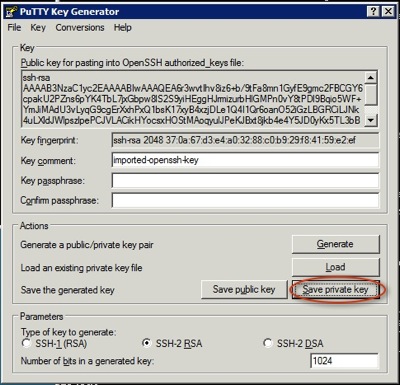 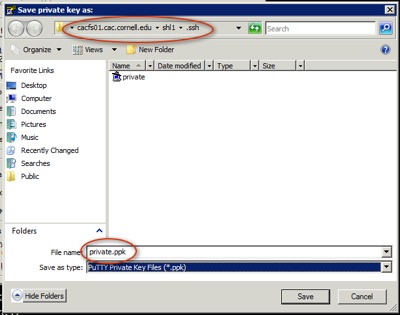 It may notify you that "The server's host key is not cached in the registry." Type "y" to "store the key in cache."

In PuTTY, you will want to update your Saved Session for linuxlogin to use the new key. Load the linuxlogin session. Navigate to "Connection > SSH > Auth", browse to %USERPROFILE%\.ssh and open the id_rsa file. Go back to Session and click Save. Now you won't need to enter a password for linuxlogin ever again!